Is there syntax like `(%%a ∧ %%b) for matching against expr in Lean 4? We use this frequently in mathlib tactics, e.g., https://github.com/leanprover-community/mathlib/blob/master/src/tactic/push_neg.lean#L43

There isn't, because we had no need for it so far. I'm not actually sure if the ideal solution is to bring it back as-is. In your experience, is matching expr structurally instead of by unfication in fact the correct behavior in most cases, or is it merely that the former is easier to write down in Lean 3?

Hmm, I'm not sure really. We definitely don't want to do semireducible matching usually; if prime p means 2 ≤ p ∧ ∀ m ∣ p, m = 1 ∨ m = p then we don't want push_neg to unfold that. But we don't use reducible definitions very often, so I don't know whether it would make sense to unfold them or not.

Fwiw, note that match with syntax quotations is in fact a macro completely separate from "constructor match". So there's precedent showing that custom match constructs can be introduced modularly (...almost. Identification of pattern variables is currently hard-coded).

(and only as needed to resolve a match against a metavariable)

You mean in the discriminant?

Yes, the expression(s) after match is called the discriminant in GHC lingo. So expr match would need to become monadic to support your case :grimacing: .

It need not be syntactically match

I just want the ability to do that, and easily enough that I won't accidentally use match instead

We originally had a separate match_syntax syntax, but reusing match is very convenient in practice because it means you can immediately use it with macros on top of it, e.g.

It's not uncommon to use things like `(%%a /\ %%b) <- pure e, putting things in the monad anyway even though it's not monadic, just because the left arrow gets this pattern match sugar

Yeah, I definitely think this would be great to have outside the stdlib :)

It's funny that the situation is exactly the opposite from syntax quotations: those are monadic when used as terms (because of hygiene), but their match is non-monadic

FWIW, I'd like to establish `[A|...] as the standard syntax for parsing a term of type A (using A's "standard DSL" if any) and returning its evaluation: https://twitter.com/derKha/status/1354082976456441861
So it would be `[Expr|e] , and one could also (re)introduce `[Tactic|t] as a simple macro for evalTactic (<- `(tactic|t))(though strictly speaking that term is of type TacticM Unit, not Tactic, which additionally takes a Syntax) 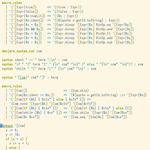